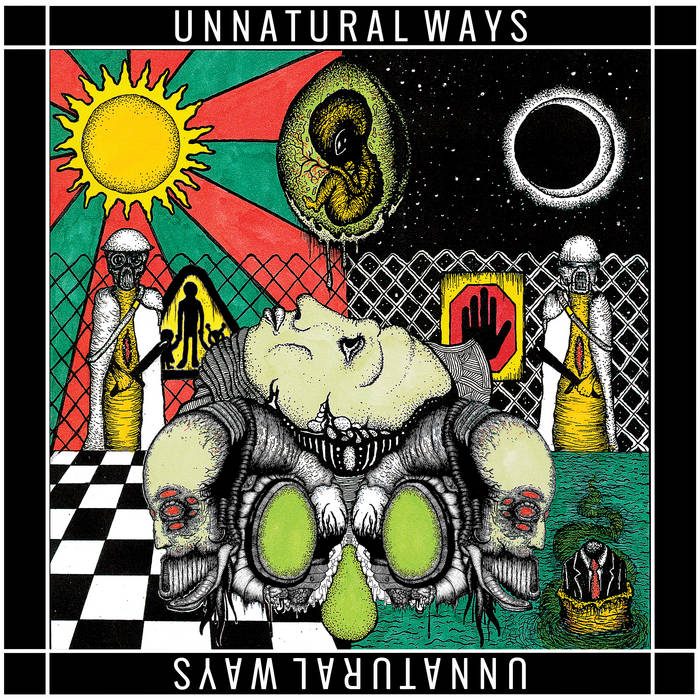 "The Paranoia Party tells the story of a confrontation with extraterrestrial life with all of the true musical mayhem it deserves — and that’s just on the surface level. Embedded in its cavorting song structures and sprawling scope, the very human feeling of dreading an existential threat makes itself and its complexity abundantly clear. The album’s finale “Cosmic Border Cop” feels terrifically on the nose in that regard. To say that borders occupy a significant place in current U.S. and global political discourse would be an understatement, and this album explores how their brutal enforcement affects the people on the other side. Crafting a work that operates on as many levels as The Paranoia Party is no small task, but Unnatural Ways founder and renowned guitarist Ava Mendoza proves more than ready. They’ve put a variety of cosmically slanted styles through a blender and laced the result with an earthy intensity, allowing for the listener to find the shining points of commonality between jazzy metal and heavy noise rock." -Captured Howls

"While it wouldn’t be dishonest to classify The Paranoia Party as a noise rock release, you’d be missing out on the electrifying jazz and metal influences present all over the album. Opener “Go Back to Space” sets the mood, morphing from mid-tempo, dissonant rock into unhinged, manic chaos. The Paranoia Party, which was mastered by Colin Marston, is a unique beast and one that will likely yield new surprises and details for many more listens."-Decibel

"With this release, Unnatural Ways aim to tackle issues plaguing the United States political realm in the current day. Mendoza explains, "The album is about aliens and being alien: political paranoia, inclusion, exclusion, migration, immigration, border crossing, alter egos and alternate realities." Not ready to succumb to the woes of the righteous fear-mongers, she notes the album's title "refers to finding celebration within the state of tension and fear we are living in."
Metallic overtones and soothing distortion held down by irresistible shifts in the backbeat and forefront riffing dissolve together in pure, noisy ear candy. Science fiction is once more a metaphorical escape from the oppression of the tyrannical governments and beliefs, dissolving into a car-crash dystopian end that leaves more questions than it answers."
-Revolver

Bandcamp Daily  your guide to the world of Bandcamp